One Man, Many Hats

Why pay an agency when you can have an Ad Guy with 20+ years experience at a fraction of the price?

My debut novel, The Book of Paul has been a #1 besteseller on Amazon, Barnes & Noble and iTunes.

Before all the ad work, novels and screencraft, I was a fine artist. Now I’m back into it again!

Over 300 five and four star reviews.  Check out a few, or better yet, try reading a few pages on Amazon!

Show Me More!
i

Check out the loglines and synopses. If anything catches your fancy, I’m happy to send the PDF.

Paintings, drawings and prints. Abstract, figurative and a little of both. Plenty to see (and soon), buy here!

The Richard Long Story (aka resume, bio, whatever)

The story of my life? I thought you’d never ask. I was born in a leaky log cabin in the–well, actually it’s not that kind of story. I’m a PROFESSIONAL, so (ahem) let’s get serious.

Don’t you hate resumes? I know I do. I’m not big on bios either. This is the closest I’m willing to get. I’ve been the President and CEO of three companies, so I’ve  interviewed a lot of candidates. Having been assaulted by countless two-page resumes bloated with over-cooked job descriptions, kitchen sink lists of responsibilities and Olympian accomplishments, I’m going to spare you the trudge and hand out a highlight reel. Just the main facts ma’am.

What’s the first rule of filmmaking? Show don’t tell. As much as possible, I’ll let the work do the talking. There are two big galleries here, one for my ad portfolio, one for my art. Please peruse (links above).

Of course, as an Ad Guy, I’m gonna put some sizzle on the steak, so I’ll tell a tale or two and highlight plenty of reasons why you’ll want to connect, collaborate and have some good clean, creative fun together.

As to my personal life, I might touch on it occasionally in the blog section. It’s been an extremely unusual journey, with plenty of bizarre adtentures to recount, but I prefer to channel that into my creative FICTIONAL writing. In short, this site is about the work of my professional life and my intention to make a lot more of it.

When I was kid, I spent most of my indoor time reading and drawing. I went to the University of Arizona for a BFA degree, but didn’t get really serious about making art until my mid-twenties. Around the same time, I landed some illustration work and took post-grad classes at the School of Visual Arts in NYC, hoping to make some serious cash, because, hey, Manhattan is not a cheap place to live.

I had the great good fortune to be mentored by artist Nancy Chunn, who helped me find my creative voice (in both visual and textual expression). In addition to the abstract and figurative drawings I’d been doing, I threw myself into painting, silkscreening, and other printing processes, incorporating totemic motifs and snippets of text. Around the same time, I began to explore my interest in writing, first with poetry, then playwriitng, screenwriting and finally chasing after that big white whale with my debut novel, The Book of Paul.

If I had committed solely to visual art and creative writing, I’m sure my output would have been more prodigious, because I really like to work. Then again, I also like to live comfortably, and my foray into advertising occupied more than twenty years. Oh well, I won some shiny statues. 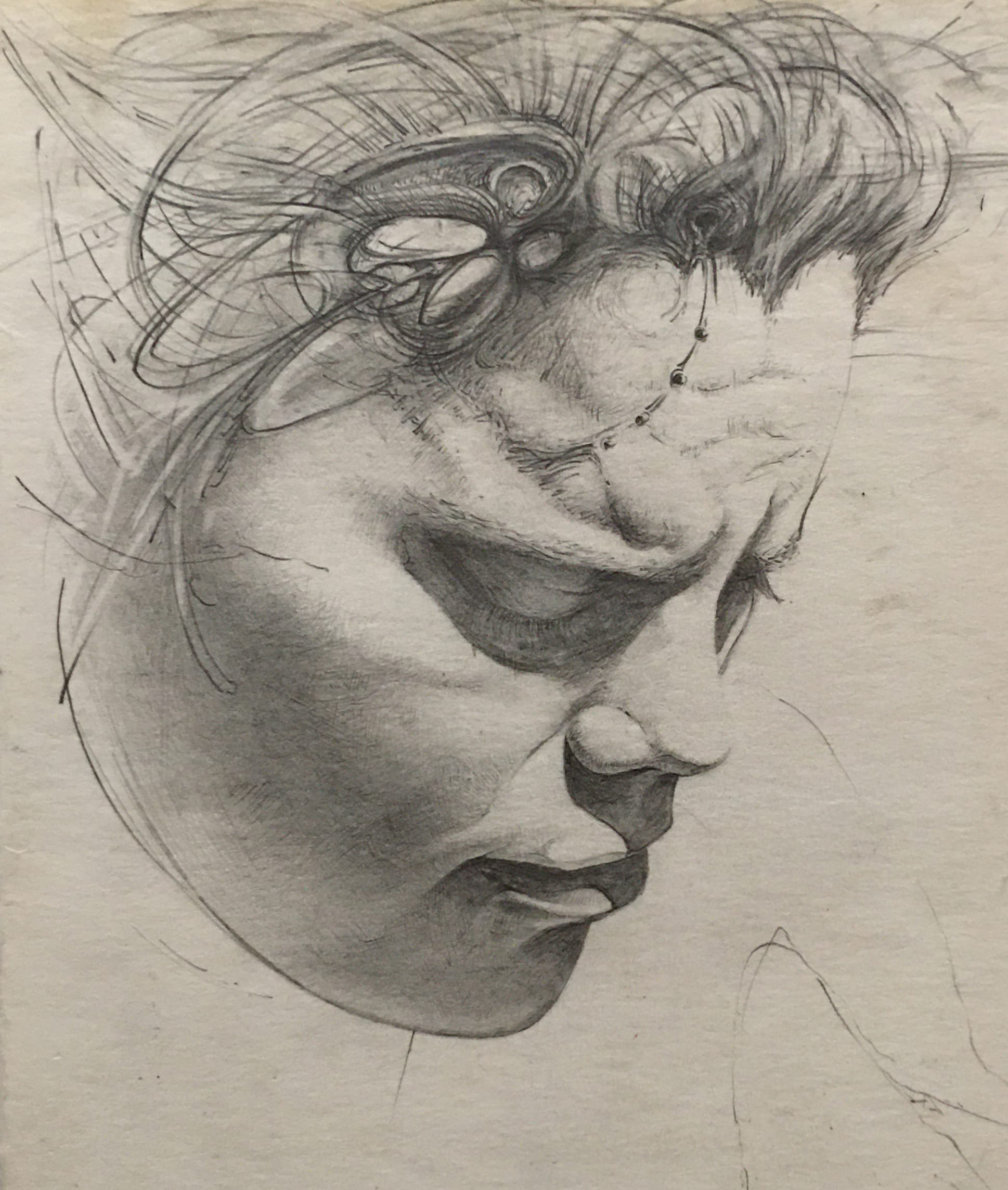 My first gigs in commercial art were freelance editorial illustration jobs.   I got tired of art directors telling me what to draw, so I began working at a small New York ad agency as an art director and graphic designer. I discovered a flair for copywriting and eventually became Creative Director. Working at a smaller agency allowed me to explore my interests in marketing strategy and brand building. After three years at Canon & Shea Associates, I was the chief architect of every ad campaign. I pitched new clients, gave good service and built strong client relationships.

Unsurprisingly, I soon opened my own agency.

Long Advertising was founded in 1990. Our initial focus was business-to-business marketing. We were responsible for numerous product launches and gained a reputation for strategic positioning and brand building. Clients ranged from Fortune 500 multinationals to entrepreneurial start-ups. A small sample of our Biz-to-Biz accounts: Allied-Signal, Blue Ridge Paper Products, Certainteed, Direct Marketing Association, IBM, The Image Bank, International Paper and Mitutoyo.

I yearned for more creative fare, so we branched into consumer advertising. As Creative Director, I had written, directed and produced a number of corporate videos for our B-to-B clients. So I applied that experience to television and radio ads, which won over 60 major industry awards including: Telly, Communicator, Vision, Moebius, Silver Microphone and Summit Awards.

In the interactive media sector, we designed and built a number of websites and created banner ads, pop-ups and rich media.

So there’s the basic bio and credentials. And here’s the point where you ask the only question that matters: What can this Ad Guy do for me?

I worked with the Liquid Packaging division of International Paper for many years. They printed small milk cartons for school lunch programs. For the side panels, their previous agency created a cartoon character called Rudy (the rabid?) Raccoon. Rudy was their resident spokesrodent, espousing health and nutrition tips.

My response? “Um, don’t you think there might be some extremely popular cartoon properties out there that would jump on the chance to contribute helpful advice to kids on four billion milk cartons?”

Thus MilkMedia was born. We were instantly successful, creating side panel programs that kids, parents and school administrators went bonkers for, featuring iconic characters like Disney’s Doug, Carmen Sandiego, Tony the Tiger and The Powerpuff Girls.

MilkMedia was dedicated to promoting health, nutrition, ecology, and positive social values for school age children. At the peak of our distribution we shipped over six billion messages to schools nationwide. We also distributed lunchroom posters and in-school POP material.

In order to reach older kids who had turned away from milk, we created a new program called Milk Rocks, featuring messages from Justin Beiber, Demi Lovato, Maroon 5, Rascal Flatts, Plain White T’s–virtually every pop star that appealed to our tween target audience.

In 2012, we reached a fork in the road with our distribution partner, Evergreen Packaging, who printed and shipped the cartons. They wanted to promote paper recycling (a noble goal), yet we felt strongly that the message space was more beneficial to kids as a venue to promote positive values. In our final year, I was in the process of creating a more ambitious campaign, partnering with Michele Obama’s school nutrition program.

I donated our remaining inventory (billions of impressions) in support of anti-bullying campaigns. It remains a cause near and dear to my heart, as I’m the proud father of a frequently bullied autistic teenager.

You can read more about her amazing journey at: Emma’s Hope Book.

MilkMedia was my dream job in terms of minimum work for maximum profit. It was so lucrative that I closed down Long Advertising and waved goodbye to all that overhead. An even bigger benefit was the extra time available to me. When Long Advertising was fully staffed, I routinely worked seven days a week to meet all the deadlines.

With the luxury of time on my hands, I threw myself into finishing the novel I’d been sporadically picking away at in my “free time.” Within two years I had completed The Book of Paul. It was published to rave reviews and won a few awards too. I just recently completed the sequel and I’m halfway though the next book in the series.

In the early years of my advertising career I took a stab at playwriting and screenwriting, but the demands of work made it an either/or choice. I picked the ad world, and yeah, I largely regretted it, though after some years away, I’m hungry for the creative problem solving and  collaboration again. The ad shingle is out!

That doesn’t mean I’m turning my back on the writing or my art. I’m making new drawings all the time. I’ve completed two feature scripts, a TV pilot and have three other film and TV scripts in development. 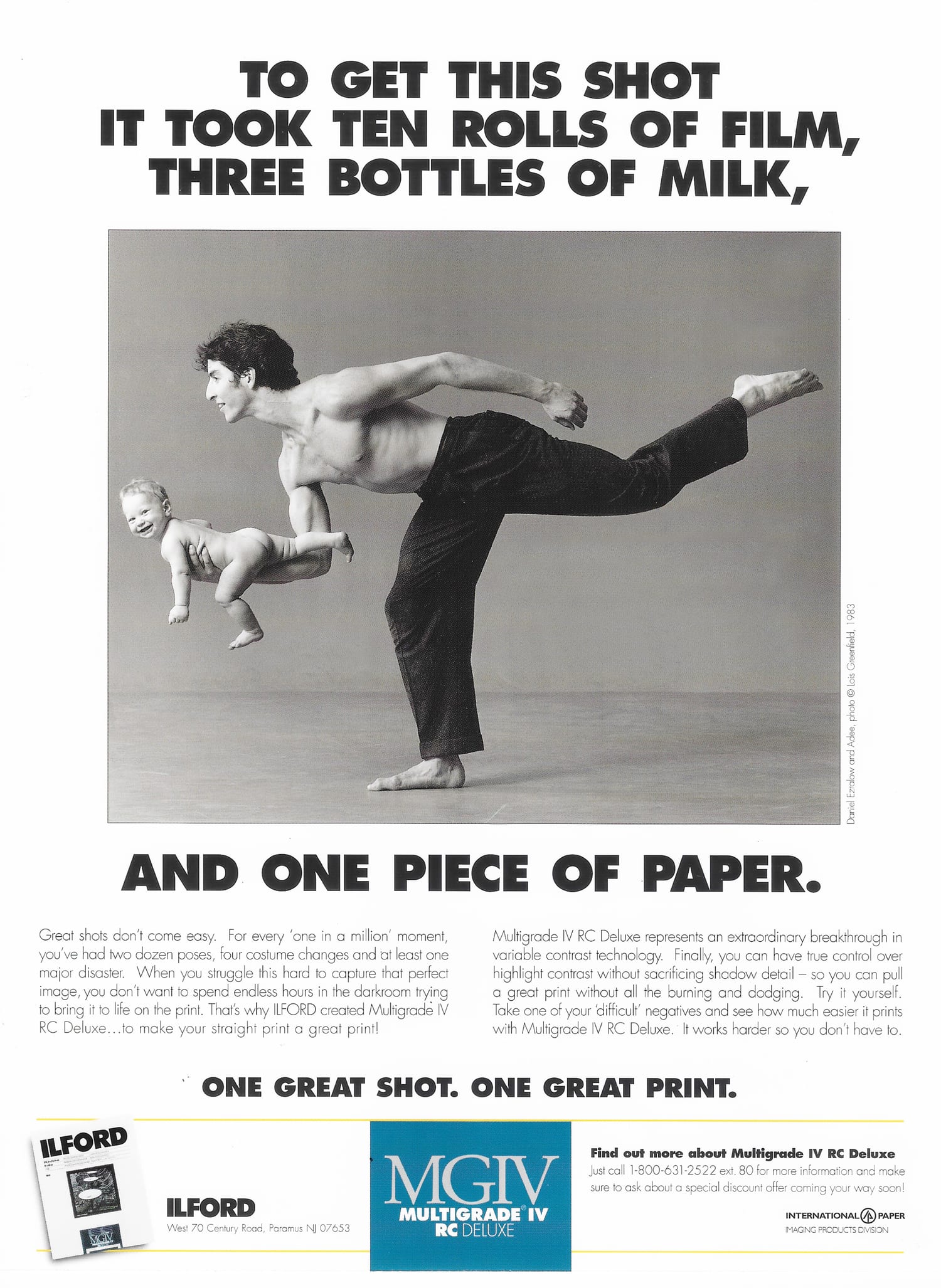 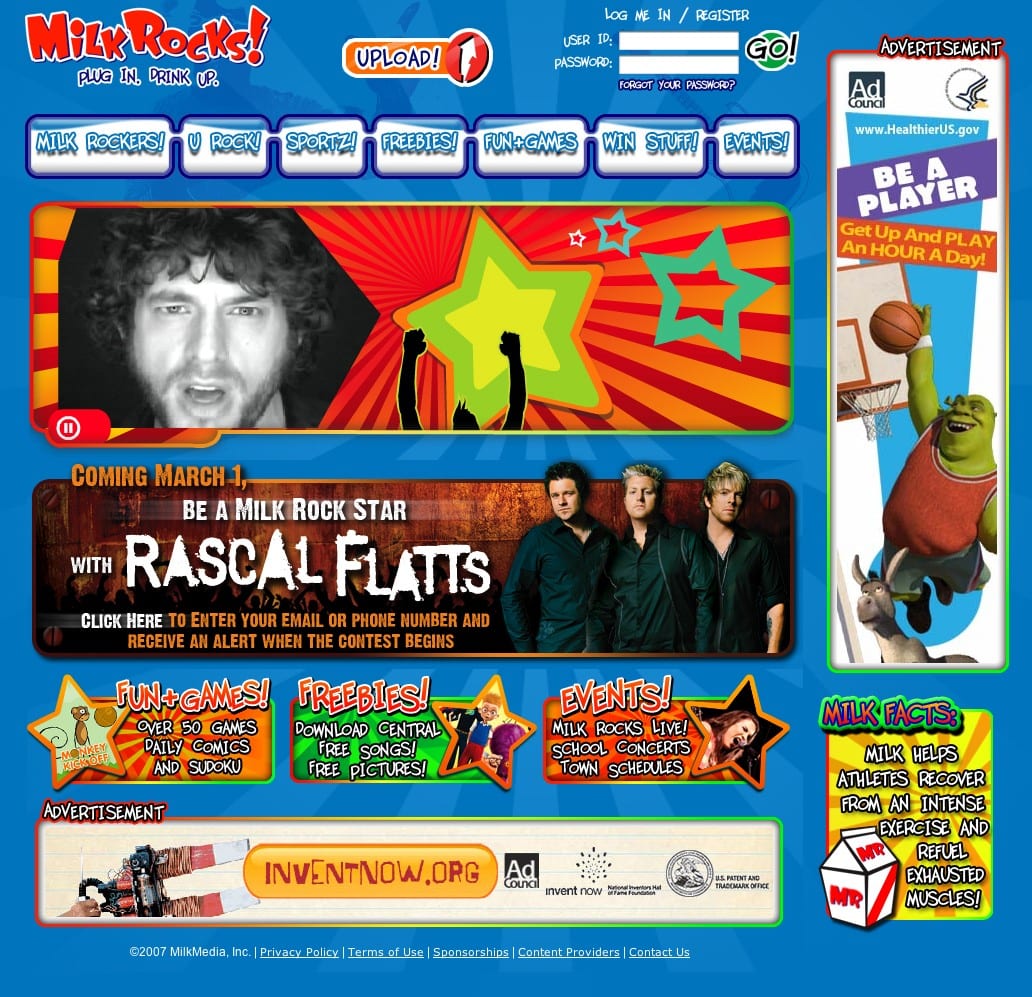 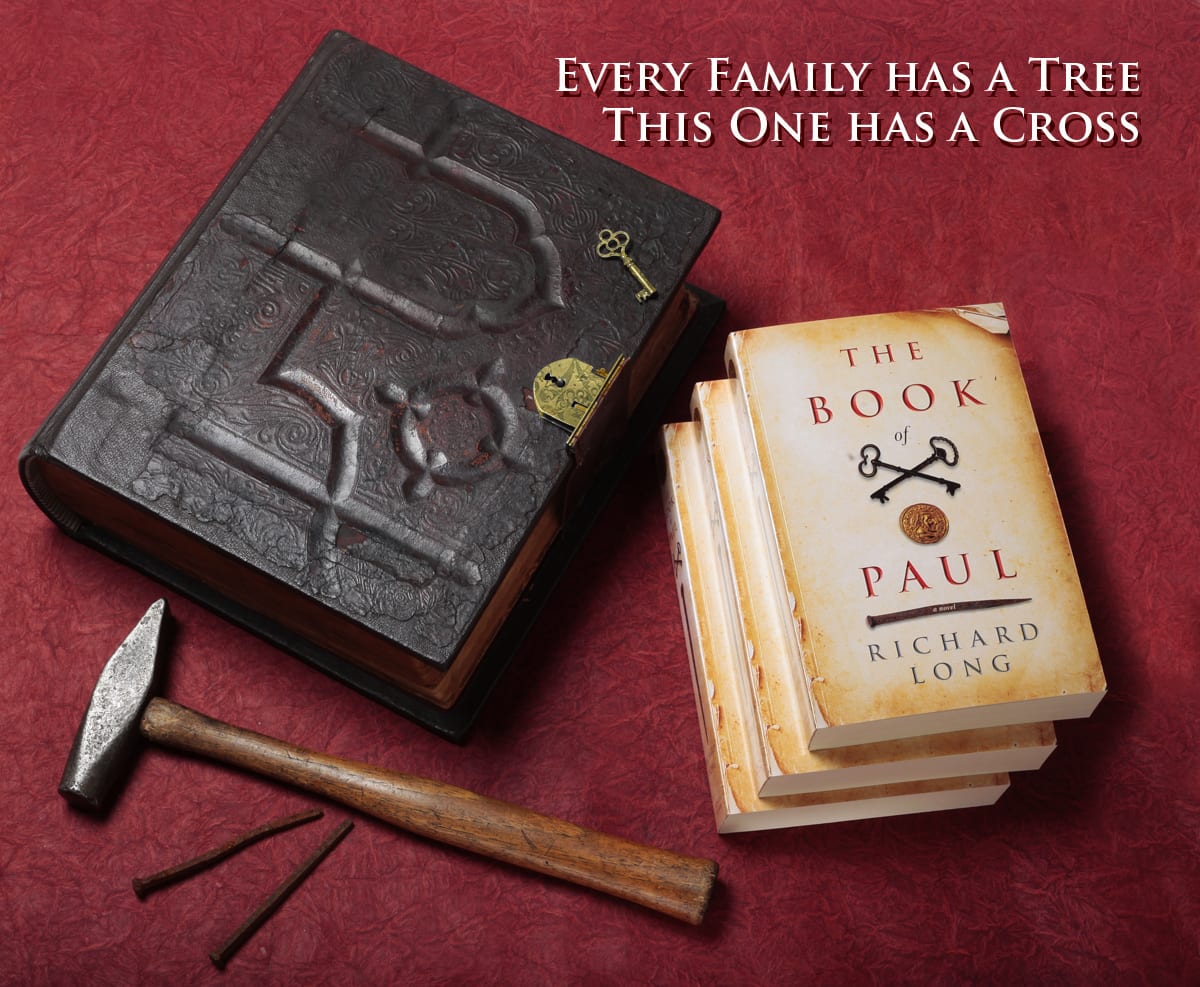