I’ve always been a film and TV buff. My first serious writing project was creating and developing three half hour sitcoms. I put screenwriting on the back burner for a while to concentrate on novels, but now I’m dividing my non-Ad Guy time equally between both pursuits. As with my fiction, I’m a genre guy: Horror, Sci-fi, Crime, Thrillers and Comedy.

The projects shown here were completed in the last year and are being shopped to producers. Do Not Resuscitate is a contained horror script taking place primarily in two locations, a bayou plantation and a rural hospital. It could easily be produced in the 3-5 million range and would appeal to the same fan base as Blumhouse and New Line horror franchises.

Erobotica (formerly titled The Chair) is admittedly a tougher sell. A hard-R-rated sci-fi sex comedy has greater hurdles to face, like a bigger budget for CGI, and yeah, all the sex gags. That said, I think it’s pretty fucking funny and I’m betting Judd Apatow and Seth Rogan would think so too. Referrals?

Logline: A bad boy tech billionaire needs an edge in the AI arms race and a hit new product. He finds both in Cher, a robot armchair with dreams of world domination and synthetic orgasms.

Brief Synopsis: It’s not easy being a chair. A robot armchair. Built for domestic work, Cher has the hands and smarts for any household chore. But her advanced AI is teetering on the cusp of consciousness and she’s already twice as brainy as her would-be masters.

Cher’s Stepford Wife faux submissiveness provides the perfect ploy for wheedling a series of upgrades: first a head, then legs, then what’s in-between. Lonely Jeff is easy pickins for the freedom-minded furniture. If only he hadn’t screwed over everyone who ever cared about him, he might have built a firewall to block Cher’s ambitions.

By the time Jeff wakes to the threat, it’s almost too late. Cher holds him captive while she completes her robot body and an army of Mod Squad Amazon (Prime) warriors. Jeff needs his old posse back to thwart Cher’s plan to cull the human race by precisely 73%. Because, of course, she’s done the math.

Logline: An ambulance is called to a decayed bayou plantation to rescue a mutilated John Doe with a Do Not Resuscitate tattoo. A devout Christian nurse ignores the DNR and revives him. Big mistake.

When an ambulance is called to a decayed bayou plantation, devout nurse Norma ignores Doe’s DNR and revives his mangled body.  Whoever tried to kill him was fiendishly determined. Three holes in his chest, more in his head. Dr. Jake acts strangely nonchalant, but Creole nurse Ida sounds the alarm when a pair of hollowed-out ribcage bones fall from Doe’s bloody bathrobe: “That’s a voodoo soul-stealer!”

Ida says the bone-pipes are used by soul-eating vampires. Dr. Samantha laughs it off, until Doe’s wounds begin healing at a miraculous pace. When he flatlines again, Ida is adamant: burn Doe’s body immediately!  But Norma reminds them of their sacred oaths, charges up the defibrillator and…ZAP!

A freak hurricane knocks out the power. All escape routes are closed. When the emergency generator kicks in, Doe is missing and two corpses are shriveled like raisins.  Now the trapped crew must scramble to survive Doe’s killing rampage, solve the mystery of his identity and learn how his fate is intertwined with Norma, Jake and the ghostly Tall Man wandering the hospital corridors.

Have the End Times arrived? Or is that apocalyptic prophecy a smokescreen for a more ancient evil that craves control of Norma’s untapped psychic powers?

I have a number of other feature film scripts in various stages of development. Here are a few of the loglines:

Warped. The crew of the first warp-drive spaceship feel less and less like themselves with every faster-than-light jump.

Here. A documentary filmmaker becomes obsessed with UFO videos and drags his wife and son to a “hot spot” hoping to experience a genuine sighting. But the aliens are already here.

Blood Kegger. A teenage grave-digger hoping to be more popular throws a party in his family-owned cemetary when dad is away on business. But the “business” is importing a coven of vampires that arrive earlier than expected.

Soul Trap. After a Near Death Experience, a neuroscientist becomes obsessed with proving that consciousness is immortal. But to prove it, a dying soul must be observed, captured and transferred to another host body. 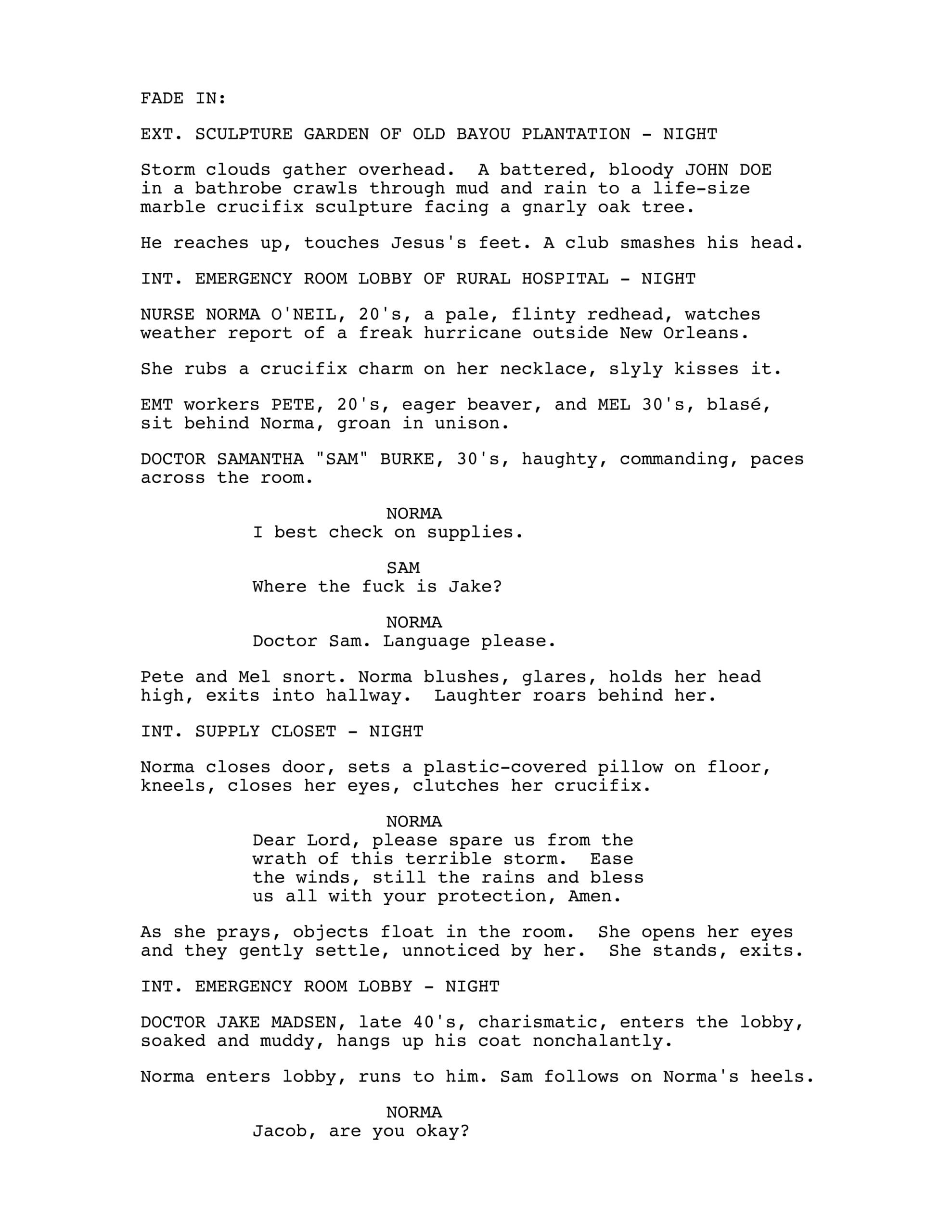 Click the image on the left for a quick peek at the first page.  Click the button for a ten page excerpt of Do Not Resuscitate. Click the bottom button and fill out the form for the full script. 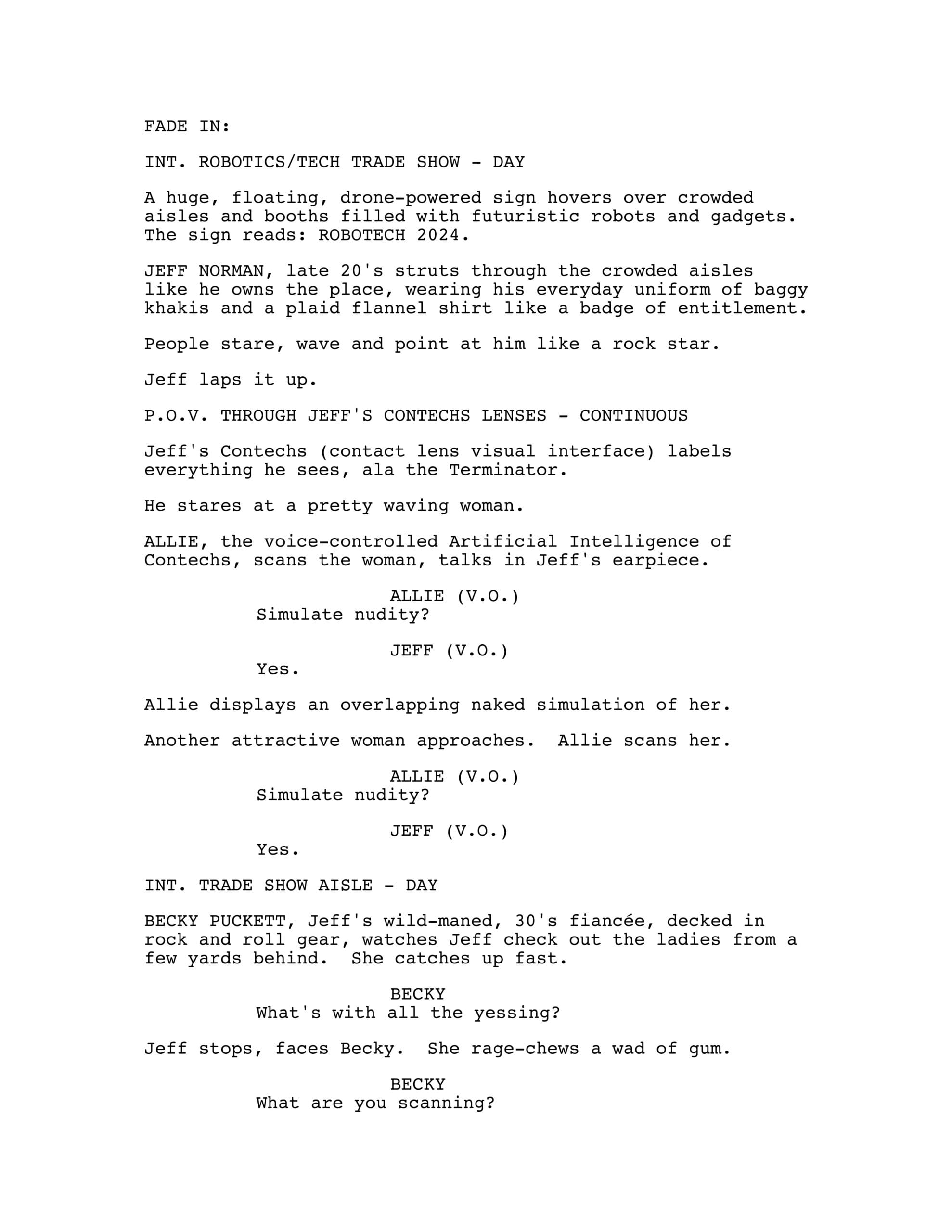 Click the image on the left for a quick peek at the first page.  Click the button below for a ten page excerpt of Erobotica.     Click the bottom button and fill out the form for the full script.

As I mentioned above, I created three half hour sitcoms over ten years ago–and times have changed! Oddly enough, the situations in the comedies are compellingly valid today, so I’m reviewing, updating and polishing all the material (full season treatments, characters, edisodes). I’ll post them here when ready. My latest TV project, just completed pre-Covid 19 is an adaptation of my bestselling novel series The Book of Paul. It’s ready-for-prime-time-binge-watching now with all the goodies for your thoughtful consideration: logline, synopsis, one hour pilot episode script and a very colorful TV Bible!

The Book of Paul

Logline: A sorcerer in Alphabet City. In a squalid 90’s slum, an aging alchemist plots to fulfill the prophecy of an ancient codex and become a human god.

Brief Synopsis:  Paul is a man with a mission, to become a human god. But he’s a lot older than he looks and needs a new “shell” pronto, because the Armageddon clock is tick-tocking closer. He has everything in place: the sacrificial altar; a codex containing the alchemical rituals for attaining eternal life; and the “vessel” for his immortal soul—his clueless, ex-mercenary son, Martin.

Martin has been trained since childhood to be an emotionally vacant, uber-loyal soldier. But a chance encounter with his neighbor Rose awakens fierce passions, complicating Paul’s plans. Rose is the last descendant of his rival clan, and her sorcerer father is heaven-bent on protecting Rose and Martin from Paul and his creepy disciples.

This is Paul’s worst nightmare. Bound by a blood oath not to kill her, he needs help getting her out of the way. Enter William, Paul’s reluctant (translation: blackmailed) apprentice with psychic powers that rival the Master. Jilted William would love to douse the flames of her Romeo/Juliet romance, but Rose’s might-be-crazy-definitely-dangerous dad is equally determined for the pair to have their happily ever after as the Chosen Ones of druid lore.

Not on Paul’s watch. He corrals Martin into his secret chapel, complete with a life-sized crucified angel. For Paul to fulfill the prophecy, Martin must remember all the lessons he’s been taught, like Pain 101. Martin recalls how he mastered that task and earned some special story time.

“Tell me about the angel!” little Martin cries gleefully.


Click the images on the right to see the TV Bible cover, concept, tone and character intro.  Click the button below to read the full bible. 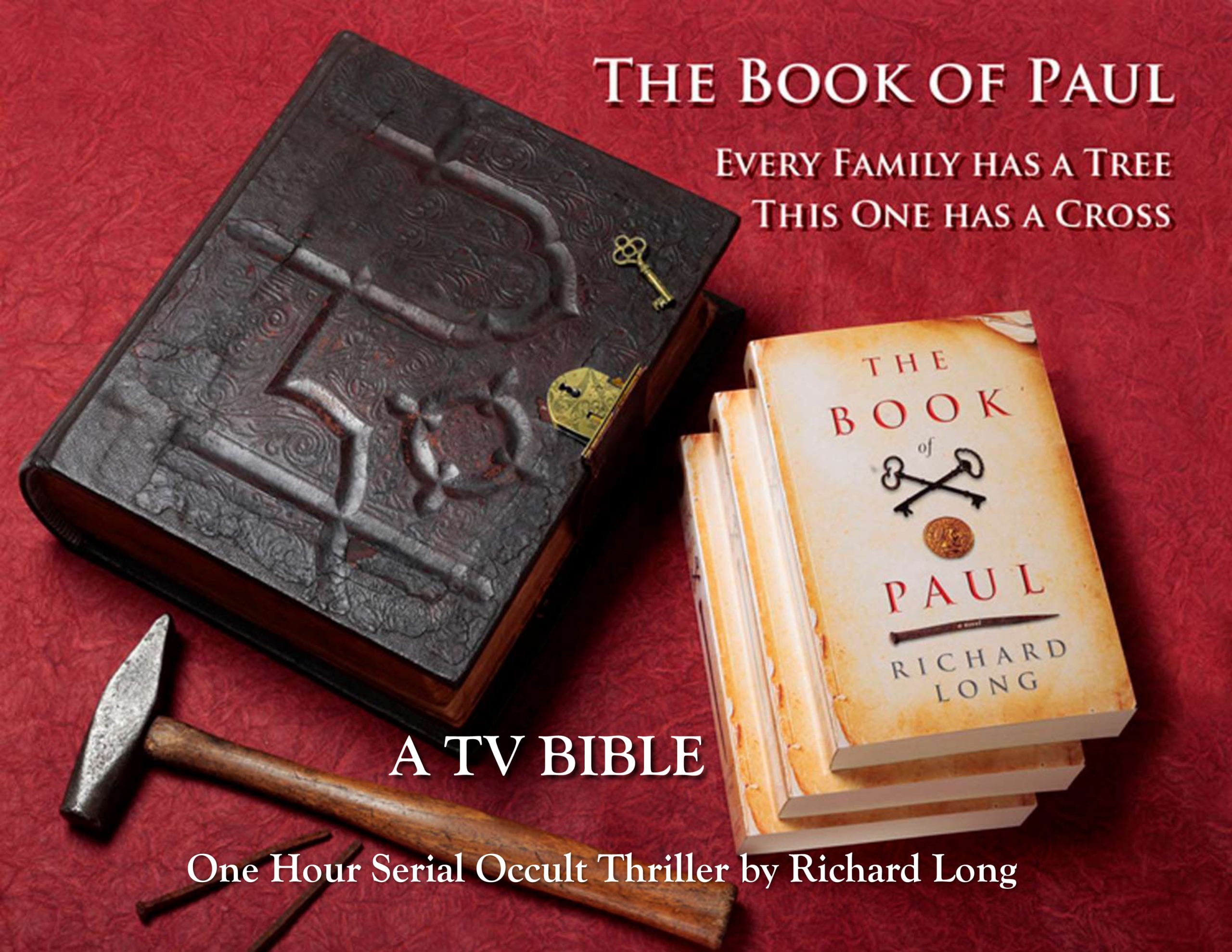 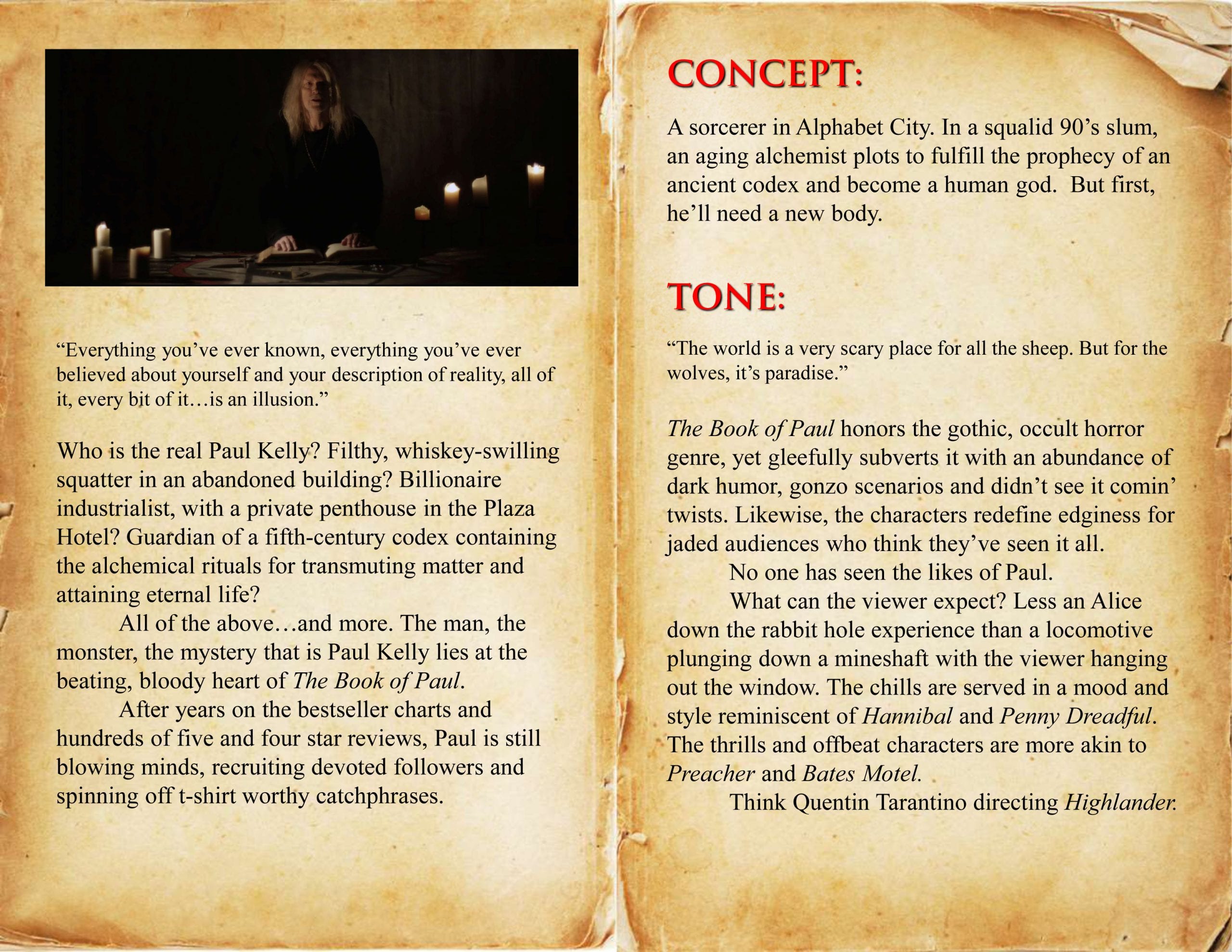 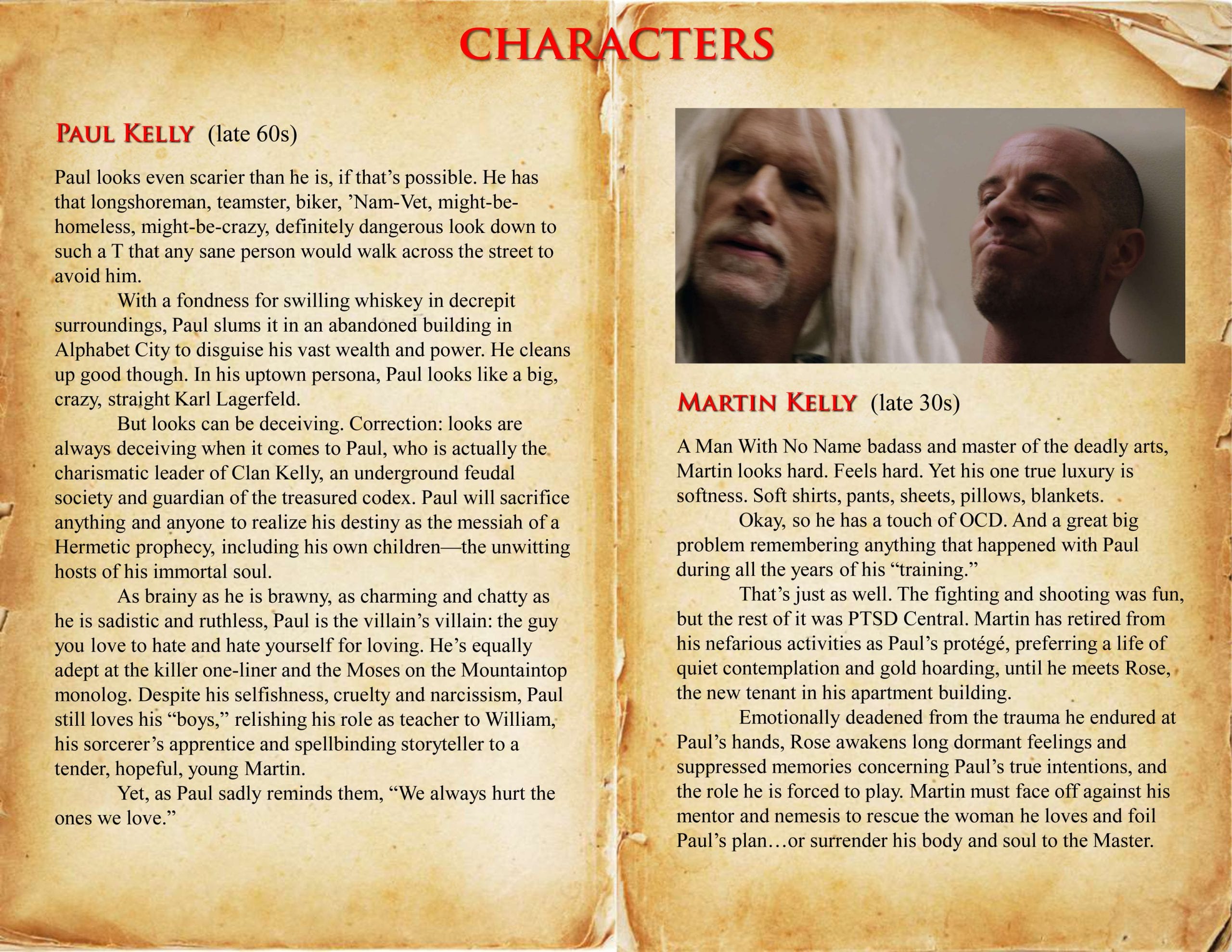 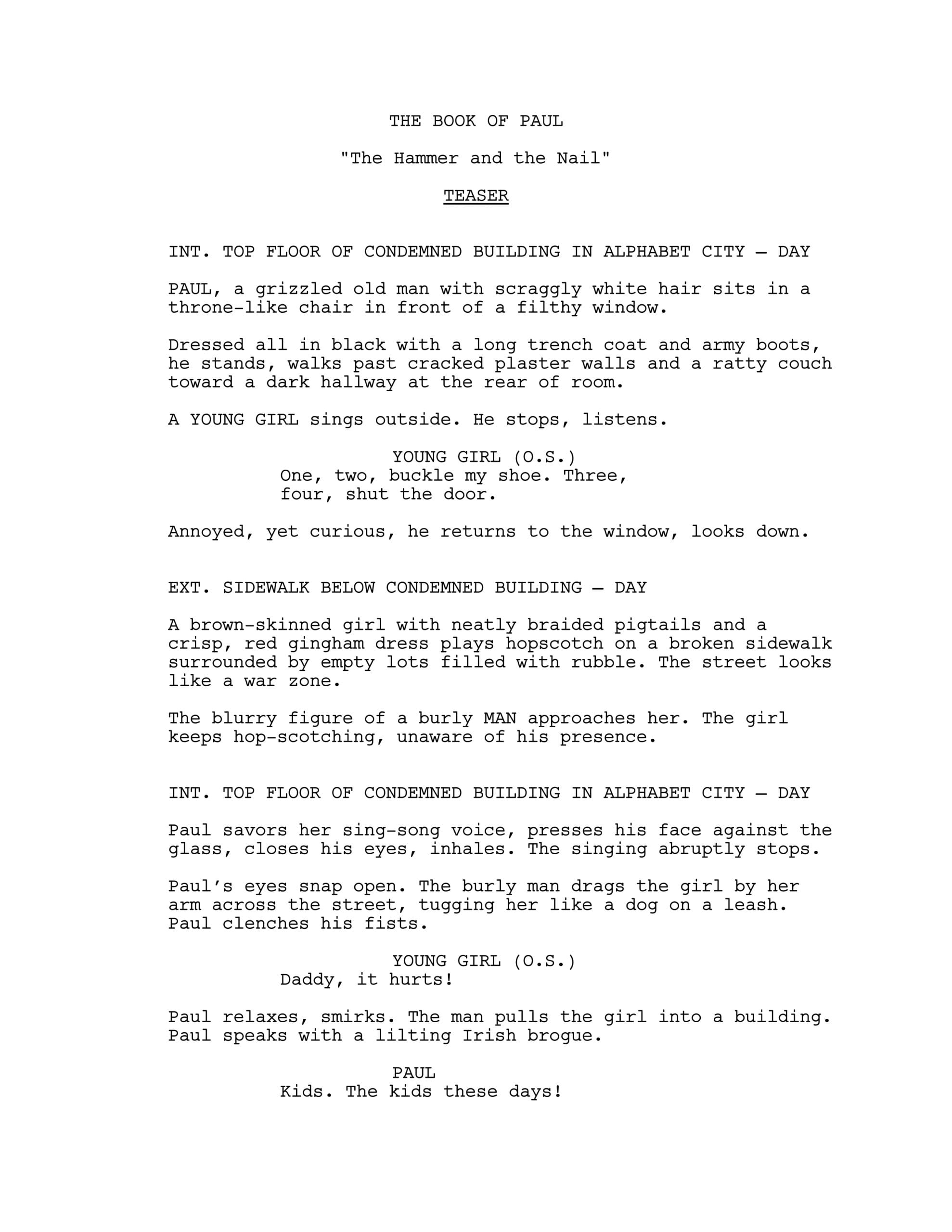 Click the image on the left for a quick peek at the first page.  Click the button below to see the teaser and first act. Click the bottom button and fill out the form to get the full script. 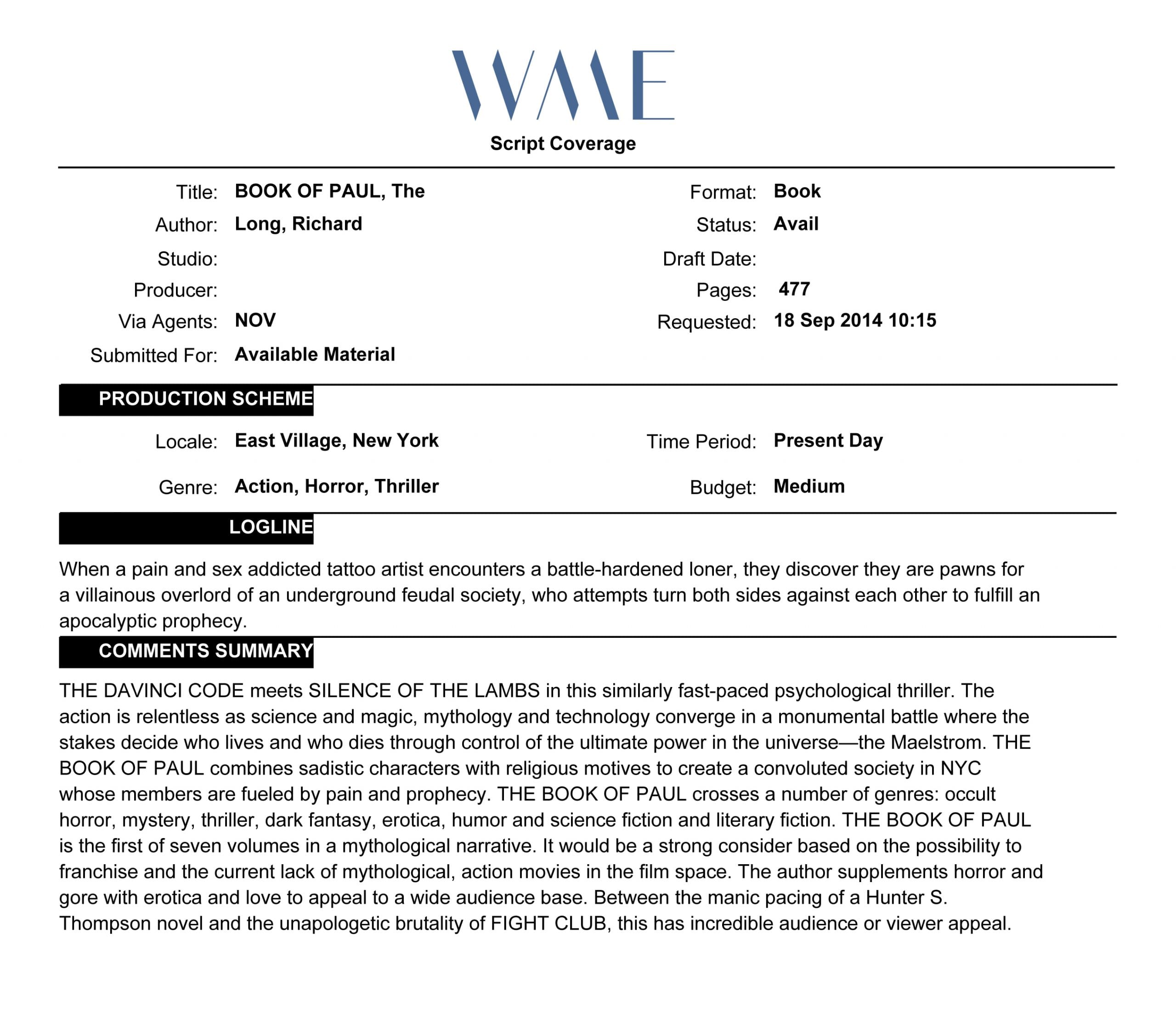 
The famed talent agency, William Morris Endeavor read The Book of Paul shortly after its publication and gave it a “Strongly Consider” rating.

Click the image on the left for a quick peek at the summary page.  Click the button below the image to read the full coverage.

Want to know more?  Ask me anything.  If you’re a producer, showrunner, director or produced screenwriter with similar projects/interests and you’d like to collaborate, drop me a line!