I’d been working for the wine importer, W. J. Deutsch and Sons, LTD. for about a year on various projects. They liked our work, named Long Advertising agency of record and we began work on their flagship brand, Georges Duboeuf. At the time, Duboeuf was the number one French wine in America. The brand was built largely on the salesmanship and distribution savvy of Deutsch, with very little consumer ad support. The top product was Beaujolais Nouveau, which had built a reputation for being a festive holiday wine.

Sales had been flat in recent years. Our assignment was to revitalize the brand. We faced a number of challenges. French wine as a whole was rapidly losing ground against “new world” varietals, particularly those from California and Australia. French wines were perceived as overly complex and inconsistent, with incomprehensible labeling. France also suffered from an elitist image to the average American consumer.

Core wine consumers (baby boomers) were rapidly aging. We needed to reach a younger audience without alienating the core. And we had a very modest budget.

Our first step (which is our first step on any assignment) was a strategic positioning statement. We did extensive research and discovered that although the typical core user for most other wine brands was in the 35-50 age range, the typical Georges Duboeuf user skewed somewhat younger. This gave us the bridge we needed for a unified message that could reach both the core and the younger fringe.

We identified our key differentiating benefits; the leading French brand; leadership in Beaujolais (only available in France); consumer awareness of the flower labeling motif; consistent high quality; good value. The French identification was unique but had questionable marketing strengths. Leadership in Beaujolais was both unique and highly marketable.

The strategic solution: lead with the Beaujolais products (Beaujolais Nouveau and Beaujolais Villages) and limit the “French” references to associations with romance and sophistication. The flower motif was heavily used in the art direction on the television spots. We hired a world-renowned cinematographer (Barry Mankowitz of Sling Blade and All the Pretty Horses), to bring it all to life.

We created three spots; one for Nouveau; one for Villages and one for general Georges Duboeuf brand building. The Nouveau and Villages spots use humor to cross over to the younger demo. The Georges Duboeuf spot is romantic and seductive. It concludes with our new positioning slogan: Georges Duboeuf…How the world speaks French.

The campaign was a resounding commercial and critical success, winning dozens of national creative awards. Sales dramatically increased and distributors reported selling out their orders faster than any previous year. 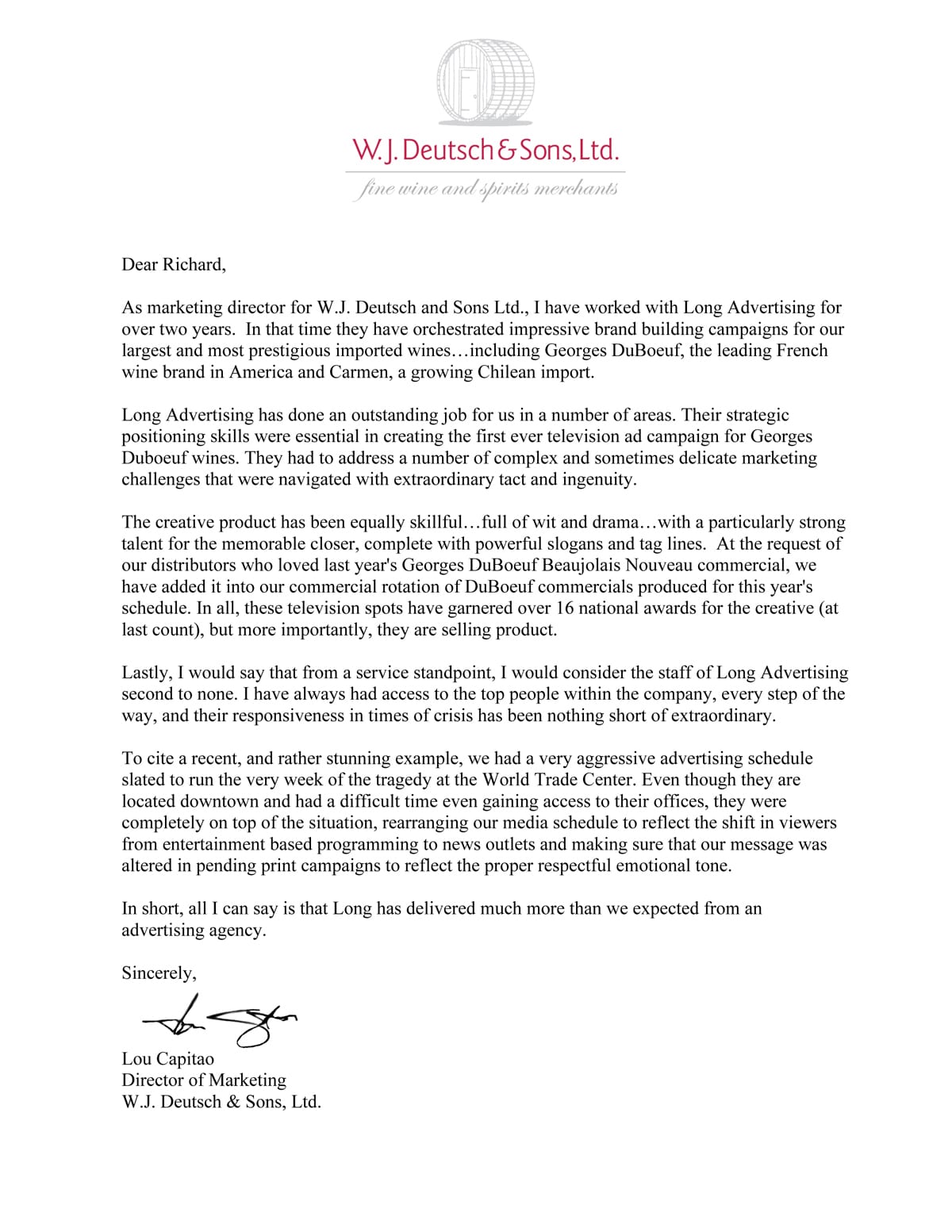 “Long…has done an extraordinary job for us in a number of areas. Their strategic positioning skills were essential in creating the first ever television ad campaign for Georges Duboeuf wines. They had to address a number of complex and sometimes delicate marketing challenges that were navigated with extraordinary tact and ingenuity.

The creative product has been equally skillful…full of wit and drama…with a particularly strong talent for the memorable closer, complete with powerful slogans and tag lines. In all, these television spots have garnered over 16 national awards for the creative (at last count), but more importantly, they are selling product.” 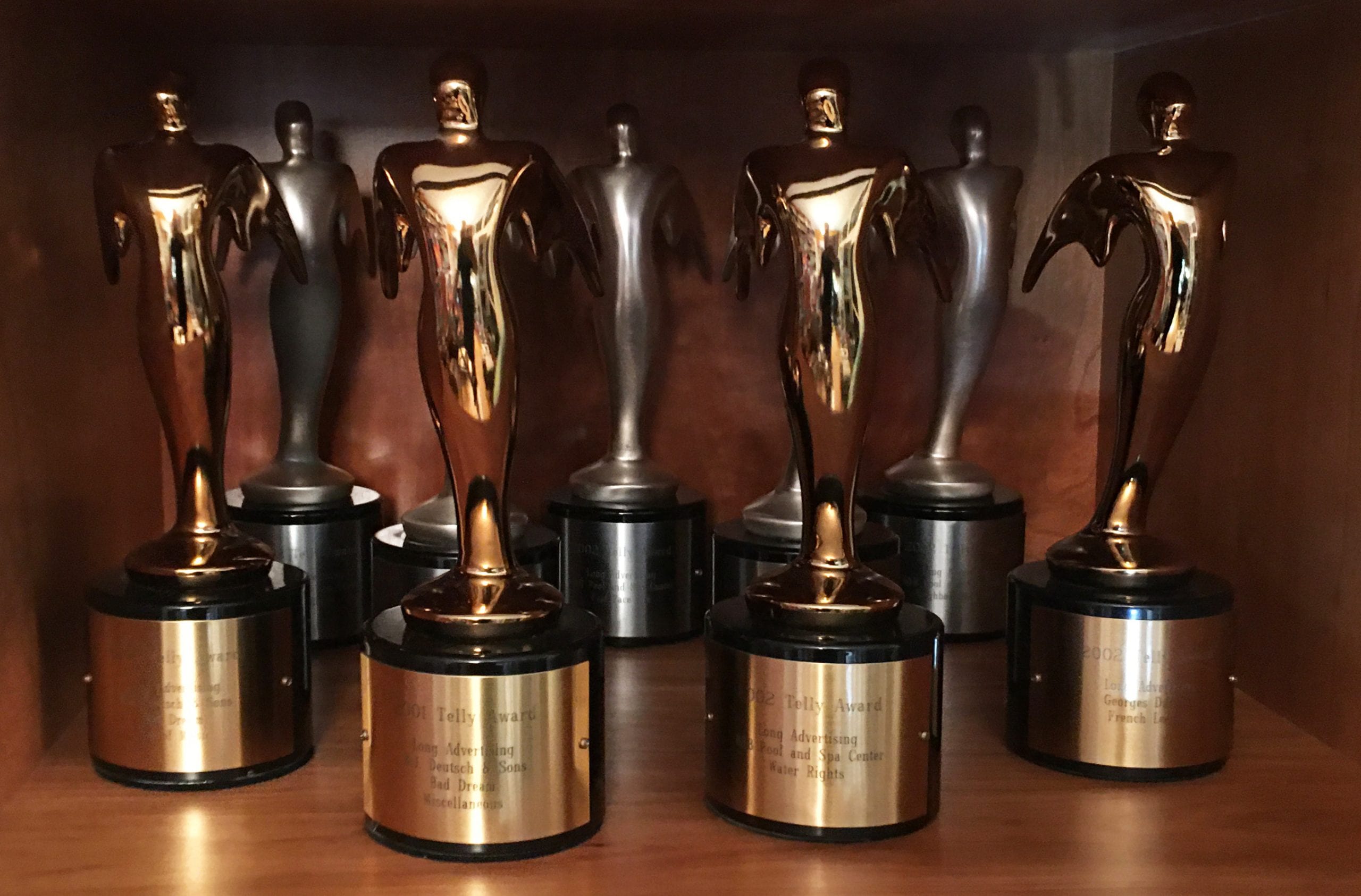